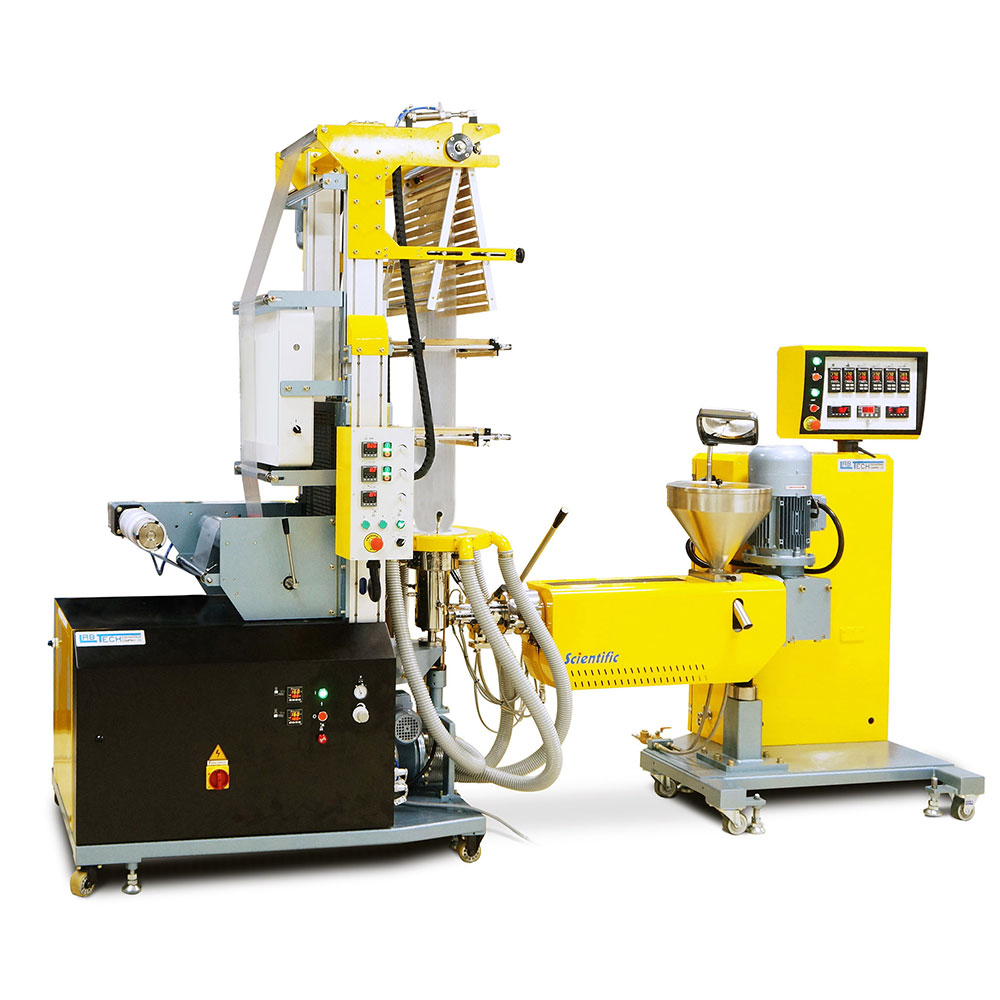 Towers type LF-400-COEX, LF-600-COEX and LF-700-COEX: Three sizes of film towers made with rigid extruder aluminum profiles with a large solid steel base and sub cabinet.  Motorized height adjustment of the Nip-Roll assembly.  The sub cabinet incorporates the electrical components as well as the blower for the cooling ring (only for standard size air ring). The whole assembly is fitted with four heavy-duty casters where two casters are equipped with brakes.  The control panel on the film tower base incorporates digital speed controls for Nip-Roll and wind up as well as turning knob for blower speed. Further it contains Up/Down buttons for the tower height adjustment as well as Start/Stop buttons for Nip-Roll, Wind up, Blower and a pneumatic switch for the lay on and off of the Nip-Rolls.  The LF-400 COEX has a roll width 400 mm that can accommodate film lay flat widths of up to 350 mm and the LF-600 COEX tower has a roll width of 600 mm and can accommodate a film width of 550 mm. LF-700 COEX has a roll width 700 mm that can accommodate film lay flat widths of up to 650 mm.  Pneumatically operated film Nip rolls with controls on sub cabinet. One of the Nip rolls is covered with wear resistant rubber and the other has a polished chrome surface. Optionally the Nip Rolls can be equipped with water cooling.  Infinitely variable speed drive of Nip rolls with heavy duty geared AC motor drive and inverter.  High efficiency single channel cooling ring for optimum cooling efficiency and high stability of the film bubble. The cooling air is supplied from a variable speed 3 HP turbo blower. The RPM of the blower is controlled with a turning knob on the towers control panel and is regulated by an AC frequency inverter. The fan speed regulation optimizes the cooling of the film. Streamlined air distribution nozzles to ensure even air flow all around the cooling ring.  Film bubble stabilizing cage is equipped with a row of Teflon Coated rollers. The rollers can also be made of carbon fiber reinforced thermosetting resin. The gate is easy adjustable for various film bubble sizes.  The A-frame (collapsing gate) is also equipped with Carbon Fiber rollers, which ensures an even flattening of the film with minimum contact friction.  The tower is equipped with four guide rollers on the down side.